If you are looking for a note-taking application, you have likely heard of Evernote. Evernote makes it possible to clip from web pages, share notes, and sync them all to one account. There are cool Evernote tricks too, making it even more fun and productive to use. Yet, OneNote can perform many of the same actions and is often overlooked. Read on to discover what separates the two applications, and which one is better for you. 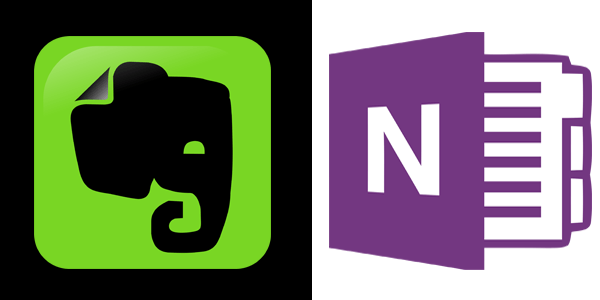 And both Evernote and OneNote let users add audio recordings to their notes. But that is only where the functionality begins. Each application has different features that set it apart from the rest.

For instance, OneNote does not limit users to linear note-taking. Users can type paragraphs into floating text boxes and move them around their notes. This feature is ideal for mind mapping or other methods of visually organizing information.

Users can increase and decrease the size of the text boxes to make room for other content in their notes. And if users find the feature bothersome, they don’t have to use it at all. But Evernote does not even offer that option.

And while both applications allow users to create drawings and handwritten notes, OneNote has the feature for both mobile and desktop. Under the Draw tab, OneNote offers highlighters and pens of different sizes and colors, as well as shapes, lines, graphs, and an eraser. OneNote can also convert both handwritten mathematical expressions to text and handwriting to text. Evernote only offers handwritten and drawing notes in their mobile apps.

But if you need to scan documents and photos into you notes, Evernote has you covered. With the mobile apps, users can snap pictures of documents or photos. Evernote helps crop out the contrasting background, turning an image into a scanned file. Users can also scan business cards and convert the print to text, but only with a premium account. This feature is great in a pinch if you don’t have a scanner and need an alternative.

While OneNote does not have this feature, Microsoft has a free alternative. Microsoft Office Lens is a free mobile app that uses your camera to take pictures of documents, whiteboards, and more. The app can convert images to PDF, Word, and Powerpoint, and can save them to a OneNote account. Furthermore, Lens can digitize pictures of business cards – just like Evernote, but free!

Another feature limited to OneNote is templates. Templates can do anything from decorating your notes to structure projects and to-do lists. Users can make their own templates for specific tasks and save them for future use. Users can create templates from scratch or make them by altering preexisting templates. But you cannot use templates in the Windows 10 or mobile apps – these are only available in the desktop version.

Another great feature limited to OneNote is the ability to dock to the desktop. This option docks a note to the right side of the desktop in a separate window. This is so much easier than having to flip back and forth between windows and tabs! This allows users to watch videos or do research while taking notes in a convenient sidebar. As with templates, dock to desktop only functions with the desktop version of OneNote.

OneNote has some other smaller features that Evernote lacks. OneNote users can do complex math equations in their notes – either handwritten or typed. OneNote also comes with a built-in dictionary and thesaurus to check words on the fly. OneNote can recognize text from a scanned document with OCR – optical character recognition – and convert it into a note. And Windows computers have the option of printing documents to OneNote.

Evernote and OneNote both share feature to help keep notes neat and organized. Each application has notebooks, which break down into smaller subgroups. For Evernote, users create folders called notebooks to store their notes. Users can also search for their notes via a list of tags. OneNote users have notebooks, which contain smaller sections in tab format. Users can sort pages via sections, as well as create section groups to organize their work.

While both note-taking apps can link notes together, the process is a bit different. In Evernote, users can insert a clickable link into another note by copying the note link. This makes connecting two or more notes together simple, sort of like a Wiki page. OneNote users can link to other pages in a more roundabout way. Typing the note’s title between double brackets creates an automatic link to the page, like this: [[insert note title here]]

And while both applications have the tag feature, they function differently. Evernote allows users to apply one or more custom tags to each note. This is simple and makes searching through notes later less time-consuming. OneNote not only allows custom tags but comes with several pre-made tags. Users can apply a selection of icons to custom tags, and alter the text and highlight color. This personalizes tags, but can be overwhelming compared to Evernote’s more simple tagging system.

It is clear that Evernote excels when it comes to organization. For example, Evernote users can create shortcuts to specific notes in the application’s sidebar. Like bookmarks or favorites, the shortcuts make the notes more accessible. Evernote users can also set reminders on each note for tomorrow, in a week, or a later date. These notes stay on top of the list until their reminders have passed. Evernote can also be set to alert users about reminders via email and app notifications.

Evernote also has better import and export options compared to OneNote. With Evernote, notes can export as a single HTML page or multiple HTML pages. But they can also export in ENEX format to transfer notes to another computer with Evernote. Users can also exclude details when exporting notes, such as titles, timestamps, and tags. As such, Evernote can import ENEX files, as well as OneNote notebooks.

As far as OneNote goes, users can export pages, sections, or the entire notebook. Notes can export as PDF, XPS, MHT, or OneNote files. But OneNote does not have a built-in import function, making uploading notes more of a hassle. Microsoft released an import tool to import content from Evernote as a separate download. Still, it does make switching to OneNote possible, especially since OneNote became free for download.

Both Evernote and OneNote have mobile apps and browser extensions to integrate your note-taking. The Evernote Web Clipper can clip articles, simplified articles, full pages, bookmarks, and screenshots from the internet. Users can annotate the clippings and then send them to Evernote.

And OneNote Web Clipper can capture articles, the full page, or one section of the page. Users can add a note to the clipping, highlight selected text and send it to a selected Notebook. There are fewer annotation options in OneNote, but it includes the same basic functions.

While each application has a web version, they differ from their desktop counterparts. Evernote’s menu has migrated to the left sidebar – and the layout is simpler. It reads more like a mobile version of Evernote, but the interface is clean. But the web version of OneNote is inferior to the desktop application.

If you use the Windows 10 App, you will recognize the minimalist layout. There is less functionality; users cannot export, use templates, do math or dock windows. After using the desktop application, these features are easy to miss.

But both the OneNote and Evernote mobile apps are powerful and functional. And both apps have handwriting and drawing capability, a task far easier on a mobile device. Evernote and OneNote are available on all major iOS and Android devices.

The Evernote apps appear consistent across mobile devices. As for OneNote, the iPad app is more intuitive than its Android counterpart. The tabbed layout is more synonymous with the desktop version and offers more features.

No need to worry – both Evernote and OneNote keep your accounts synced, no matter what device. That means that notes you take one your phone will sync to your desktop and vice versa. Users can share notes in both apps, and have several people working on them at once.

However, Evernote and OneNote handle encryption differently. In Evernote, users can encrypt highlighted selections of text. Users can hide information from some users while giving the encryption password to others. With OneNote, only entire sections can be password protected. Password-protected sections can be unlocked for a time, and locked again with the click of a button.

While there is a free version of Evernote, there are also paid subscriptions. A free account gets users access to all versions of Evernote, but only syncs across two devices and allows 60 MB of data a month. The Plus subscription – $34.99 a year – syncs across all devices, allows 1 GB of uploads each month. The Premium plan – at $69.99 a year – allows up to 10 GB of new data per month.

Search for text in documents

Yet OneNote is 100% free – no Microsoft Office subscription required. That includes Evernote’s premium features, like syncing across all devices and accessing notes offline. And with the new OneNote import tool, importing Evernote data into OneNote is simple.

While both applications have their perks, Evernote users should give OneNote a second look. I enjoy the tagging system of Evernote, but getting the premium features of OneNote for free is exciting. If you are still unsure of which app suits you, take them both for a test run and see!

While both applications have their perks, Evernote users should give OneNote a second look. I enjoy the tagging system of Evernote, but getting the premium features of OneNote for free is exciting. If you are still unsure of which app suits you, take them both for a test run and see!